In this unprecedented time, there is a greater need than ever for us to provide access to important digital resources. The PDF version of the German-Russian Handbook is full-text searchable and downloadable so you can access it from your device at any time. Continue reading below for more information about this important and valuable resource. 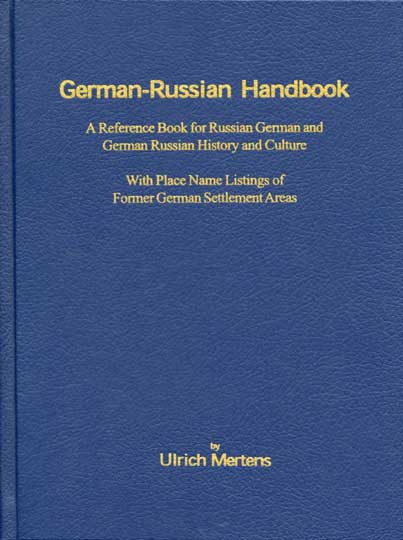 Published by the Germans from Russia Heritage Collection, NDSU Libraries

Introduction by the author, Ulrich Mertens
"Whoever has ever tried to learn something about birthplaces, organizations, publications or simply German Russian history, will know why this handbook was written. Special articles and books addressing specific questions on the history of the Germans from Russia can indeed be found – if only after extensive research. Those who do not want to find every last detail but rather have quite simple and basic everyday questions usually, however, search without success and virtually indefinitely in the difficult-to-grasp specialized literature, so far as they have the means at all for the purchase or the time for interlibrary loan, because a lexicon or an encyclopedia on the history of the Germans from Russia does not exist."

Comments from the Editors

Thomas Stangl, Ashburn, Virginia
"I highly recommend this book to the serious German-Russian researcher, being in the same realm as Dr. Karl Stumpp's book, The Emigration from Germany to Russia in the Years 1763-1862. Its contents include several timelines which outline much of the history of both Czarist and Post-Czarist Russia, with emphasis on how that history impacted the Germans in Russia. There is extensive information about the treatment of Germans from Russia in the World War II and post-War eras, including deportations and resettlements. There is also a flow chart of the process required of those who have "returned" to Germany from the former Soviet Union in recent years, seeking to become citizens of today's Germany.

The Orte list, an essential element in the original German version of the book, has been greatly expanded to include many new locations, as well as numerous cross-references to alternative spellings or names for the same location. A listing of German language newspapers published in North America has been added.

It has been my privilege to assist GRHC in the production of the German-Russian Handbook, with the identification of new locations of German settlement in Russia, in the editorial review of the book's Places list, as well as to provide the color maps found in the back of the book describing the emigration routes to Russia during the early colonial period."

Alex Herzog, Boulder, Colorado
"This book contains many excellent features, but two of them are particularly useful: a timeline listing major historical events affecting Germans in and from Russia, and a truly comprehensive listing of even the tiniest villages and other places where German Russians ever lived east of, say, Hungary. The latter consists of simple descriptions, and alternate spellings of the place name....

For anyone interested in ancestral villages and other sites, this aptly named Handbook should be of great help. While I was doing some translating for this version of the book, I personally found in its place name listings every single village in Ukraine in which my family lived up to 1944."

Allyn Brosz, Washington, D.C.
"The English-language translation of Ulrich Mertens' German-Russian Handbook is an important reference for all researchers studying the political and geographical history of the Germans in Russia. This nearly 800-page volume compiles information from numerous sources and presents it in a well-organized manner. The listing of places, updated for this English edition, is the largest section of the book, spread over more than 550 pages. It combines information from many fragmented sources into a single integrated listing of all localities where Germans settled in Russia, "from the largest cities to the smallest chutors" in the Volga, Black Sea, and Mennonite regions, as well as in Volhynia. Map references, alternate spellings, cross references between German and Russian names, founding and dissolution dates, religious and historical data, and population figures are also given for many places.

Mertens' listing of German-language publications is supplemented in this edition with "a new section" listing the North American newspapers most likely to have been read by German immigrants from Russia in the nineteenth and early twentieth centuries. Detailed timelines, discussions of deportations, martyrology, Russian and Soviet currency, and many other topics make this a veritable vademecum for the research of Germans from Russia."