Michael M. Miller set to retire after 55 years at NDSU 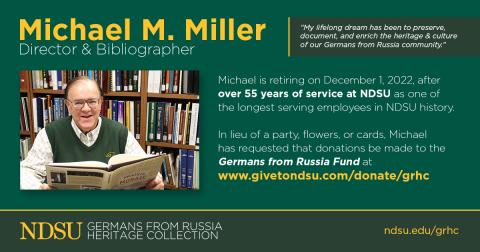 Michael M. Miller, director and bibliographer of the Germans from Russia Heritage Collection at the NDSU Libraries, is set to retire on Dec. 1 after over 55 years at NDSU. Michael joins Henry L. Bolley and C.B. Waldron as the longest serving employees in NDSU history.

An August 1967 story in the Emmons County Record reads, “A Strasburg native has been named to the faculty of North Dakota State University, Fargo. Michael M. Miller, son of Mr. and Mrs. Peter P. Miller, was appointed by Pres. H. R. Albrecht. Miller will teach library science, act as circulation librarian, and handle the library displays.”

In 1978, President Laurel D. Loftsgard called Miller into his office and asked him to create the Germans from Russia Heritage Collection. Miller was named bibliographer and later, director.

Miller has many accomplishments throughout his long and distinguished career.

Since 1996, he has written a monthly newspaper column, In Touch with Prairie Living, for North and South Dakota weekly newspapers. “And I’ll continue the column as long as I’m healthy.” Miller said.

Miller directed the Journey to the Homeland Tour, a heritage tour to Germany and Ukraine, leading 23 tours from 1996-2019. More than 700 individuals have joined to visit their ancestral villages in Ukraine.

Other important projects include his instrumental role in securing the Lawrence Welk Collection at the NDSU Archives; the Dakota Memories Oral History Project; helping create the Tri-County Tourism Alliance in Emmons, Logan, and McIntosh Counties; and serving as president of the Friends of the Welk Homestead.

Longtime friend and NDSU colleague, Thomas Isern, university distinguished professor of history, shares, “Michael Miller is a man with a mission. He has dedicated his working life to the definition, documentation, study, and organization of his people, the Germans from Russia. He has created a world-class research repository here at NDSU and has led countless expeditions abroad for prairie folk to discover their old-country roots. He exemplifies what is means to be German-Russian: hard work, dedication, faith. With NDSU as his platform and base, he has become the consummate Bison, interested in all university affairs, absorbed with our accomplishments in lab and field. He is a paragon of public service.”

Jeremy Kopp, GRHC outreach and operations coordinator, said, “Michael has had a strong personal impact on my life and career through his support, mentorship, and friendship since 2010. He has connected me to the Germans from Russia community and colleagues throughout the world. His legacy of developing and fostering relationships is something I hope to carry forward at the GRHC and NDSU Libraries.”

Jolie Graybill, NDSU dean of libraries, said, “Michael’s service and commitment to NDSU Libraries and the GRHC is incredible. His friendship has been vital for me during my first months as Dean of Libraries and I am so grateful for his institutional and regional knowledge. Michael has worked tirelessly to ensure the future of the GRHC through successful fundraising efforts, his personal commitment to donate, and his mentorship of GRHC staff. I am pleased to honor Michael’s leadership and legacy through direct support of current and future GRHC projects.”

Miller wants to ensure his legacy, so he established an endowment for the GRHC by designating the NDSU Foundation as beneficiary of his retirement account. The endowment will provide perpetual funding for staffing and projects dedicated to collecting, preserving and sharing stories about Germans from Russia in North Dakota.

"My lifelong dream and mission have been to preserve, document and enrich the heritage and culture of our Germans from Russia community. NDSU is a land-grant university for its people and its heritage. That's one of the reasons I think this collection is so important here." Miller said. "I hope that as a legacy, my service to NDSU and my gift inspires others with a deep passion for their ethnic roots to give to the GRHC."

In lieu of a party, flowers, or cards, Miller has requested that donations be made to the Germans from Russia Fund at www.ndsufoundation.com/donate/grhc.