About Tribal and Indigenous Peoples Studies

North Dakota is the home of the Oceti Sakowin (Dakota, Lakota, and Nakota), Nueta, Sahnish, Hidatsa, and Anishinaabe peoples, in addition to many other diverse Indigenous peoples connected to these lands. There are five federally recognized Tribal Nations including Mandan, Hidatsa, & Arikara Nation (Three Affiliated Tribes), the Spirit Lake (Dakota) Nation, the Standing Rock (Lakota and Dakota) Sioux Tribe, the Turtle Mountain Band of Chippewa (Anishinaabe), and the Sisseton-Wahpeton Oyate (Dakota). Indigenous peoples have lived in North Dakota for over 10,000 years and remain a vibrant force in communities all over the region. (Source: NDSU Tribal and Indigenous Peoples Studies.)

Can changing theater mean changing the world? Join us for a conversation with Indigenous actors and playwrights who are reimagining Native representation on the stage. Panelists are Tara Moses (Seminole Nation of Oklahoma), Emily Preis (Citizen of the Osage Nation) and Isabella Madrigal (Cahuilla and Turtle Mountain Chippewa). DeLanna Studi (Cherokee) moderates the discussion.

This program is free, but advance registration is required. A direct link will be emailed to registrants 24-48 hours in advance. A recording will be available on demand following the premier.

The museum’s Native Cinema Showcase is an annual celebration of the best in Indigenous film. Embracing their communities’ oral histories, knowledge and ancestral lands, Indigenous filmmakers are seeking guidance from the past and envisioning new paths for the future. The showcase provides a unique forum for engagement with filmmakers from Indigenous communities throughout the Western Hemisphere and Arctic.

Join us for the 2022 Native American Heritage Month opening with Willard Yellow Bird (MHA member) and Hollie Mackie (Northern Cheyenne).  Michael Gabbard (Delaware) will provide an opening welcome song and then an honor song for all students.

MPH student Carissa Brown Otter (Standing Rock & Dine) will share her findings from a survey she held in the Fargo-Moorhead Community with the Native American population.

Two Native American artists will be present to teach students, staff, and faculty how to make dream catchers and hemp bracelets.  Christy Goulet (Turtle Mountain) and Theodore Menge (White Earth) will be the instructors.  All supplies will be provided.  Hosted by Native American Student Association.

A Native American Thanksgiving history will be shared by Joy Annette (White Earth).

Use this Research Guide to discover Tribal and Indigenous Peoples Studies resources available from NDSU Libraries and online.

Tribal and Indigenous Peoples Studies Books Follow this link to browse highlights from the library's collection. 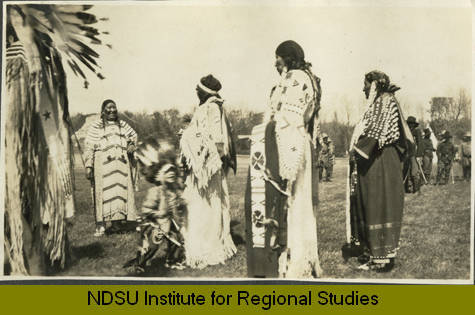 For Eagles to be Crows Collection (NDSU Archives)

Journal of the Native American and Indigenous Studies Association (NAIS)

Index of literature covering the history and culture of the United States and Canada, from prehistory to the present. EBSCO

Explores fact and fiction of westward expansion in America from the early eighteenth to the mid-twentieth century.  Adam Matthew Digital